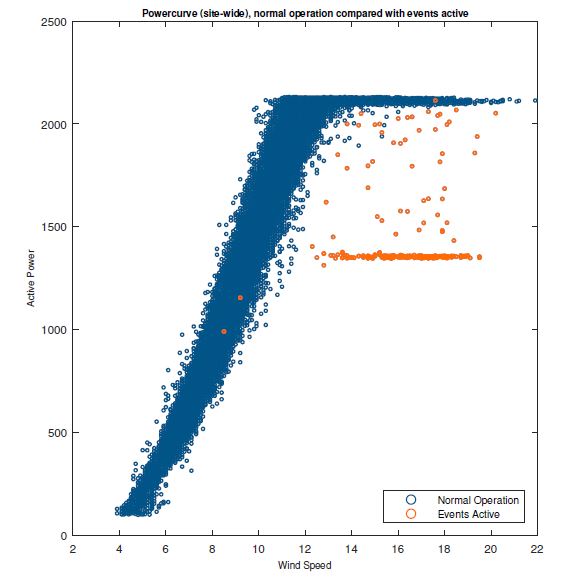 The SCADA data of every wind farm SCADA Miner has analysed reveals instances of temperature-induced constraints on at least one turbine. The most common components include:

Sometimes the manufacturer can fix gearbox temperature constraints.  They may be due to faulty or wrongly-connected sensors.  For example, the oil sump sensor connected to the input on the analogue I/O module meant for the non-driven end bearing.  If all measured components within the gearbox are equally hot, the issue may be in the cooling circuit.  Low oil, a partially-blocked oil circuit, oil pump under-performance, or leaking/obstructed bellows may cause the high temperature.  High temperature bearings could indicate damage or gearbox misalignment.  Investigate these issues early to minimise long-term damage. Refer here for an interesting discussion on wind turbine bearing damage.

If the windings themselves are overheating, this could be a sign that the resistance of the copper used to wind the stator on this generator is higher than the others on the wind farm.  Check this by examining the generator factory acceptance test certificate.  Check the 10-minute average SCADA data to determine the terminal voltage of this turbine.  Electrical heating is proportional to current squared.  Therefore, increasing voltage by 2.5% (by changing the tap on the WTG transformer) current reduces by 2.5% for the same level of power.  This reduces the I2R losses by 5% and may improve temperature performance.  Cooling fan retrofits may also be an option.

Raise it as a Defect

If the wind turbine does not perform unconstrained at its rated temperature, the wind farm owner should use the SCADA data to raise a defect.  Some gearboxes are just bad ever since commissioning.  Replacing a defective gearbox might cost the OEM many hundreds of thousands of dollars.  Raising a defect on the gearbox gives the owner a huge amount of leverage.  Use the defect to get something else from the OEM at a significant discount.